The Misconception of Fangirls: Where it Comes From and Why It Needs To Change.

It’s not a surprise to fangirls to say that the things they admire have long been trivialised, regardless of the artform. Whether it’s music, books, films, a TV show, or even the musicians and actors themselves, their dedication is often dismissed as being as vapid and superficial as they supposedly are.

Put simply, the trivialisation of fangirls is misogyny. The ridiculing of art and celebrities admired by young women simply does not happen to things loved by mostly men. A girl or woman cries while watching a movie, spends money on merchandise, travels across the world for a concert and she’s crazy. A boy or man shouts at the television, wears a sports jersey, or has season tickets for the game and he’s passionate. Even when a woman is in a fandom that’s heralded by men, she’s still wrong; she’s fake and attention-seeking and doing it to appeal to the male fans (see: female gamers).

The fangirl has shaped the pop culture landscape for decades, if not longer, and it’s time we give her the credit she deserves. At the beginning of their career The Beatles were underestimated by the general public because so many of their fans were teenage girls –  just think of ‘beatlemania’ and their matching haircuts. Now, though, they’re heralded as one of the greatest musical acts of all time and loved by men all around the world. Now, if a teenage girl loves The Beatles, she’s still dismissed; she ‘doesn’t know the deep cuts’ and she ‘shouldn’t wear the shirt if she only knows three songs’. It’s strange to think a fan space once ruled by teen girls is now mostly dads and hipsters. Maybe one day the fangirls of the future will have their loves dismissed as their Dad forces them to listen to ‘Stockholm Syndrome’ or ‘Burnin Up’.

Even earlier, on 12th October 1944, when The Beatles were just toddlers, fangirls known as ‘bobby soxers’ caused a riot on Columbus Day after a Frank Sinatra show at Paramount Theatre. Some 30,000 (mostly) girls and young women took over Times Square and the police were called to disperse crowds. These two artists weren’t anomalies either, the same thing happened with James Dean, Elvis Presley, Leonardo Dicaprio and so many more.

The earliest known instance of the fangirl phenomena, at least in the music world, is Lisztomania (or Liszt Fever). Franz Liszt was a 19th century composer whose fans regarded him similarly to how we view our faves now. Supposedly, his music had the power to bring the audience to ‘mystical ecstasy’ which, actually,… isn’t a million miles away from how I feel about Fine Line.

In Liszt’s day however, the term ‘mania’ was used a lot more seriously. Some people genuinely believed that Lisztomania was contagious and should be actively avoided, and some South German councils wouldn’t let Liszt tour in their cities having seen the effects he had in cities in the North. Of course, like any fandom, there were downsides and extremes, including stories of people keeping Liszt’s coffee dregs in vials and cigarette stubs in their lockets, but the public concern that this was a severe medical condition rather than infatuation is overt sexism. Fangirls are not ‘hysterical’. Not Bobbysoxers, not Arianators, not ARMY, and not even Superwholockians (remember that?). The general view of fangirls has improved, but even nearly 200 years later a fangirls love is still an illness – Beatlemania, Bieber Fever, One Direction Infection. Having said that, being forced to type those words did make me feel sick so maybe they were right.

In the [greatest] movie [of all time] One Direction: This Is Us, there’s an interview with a neuroscientist who explains why many teen girls react the way they do when they see their fave. When you hear music you like, dopamine is released, the same neurotransmitter that is released when you go running, or with some addictions. Put simply, “The girls are not crazy. The girls are excited”.

‘Girls just like them because they’re good-looking.’ How many times have we all heard that? Whether it’s about Elvis, Shawn Mendes, BTS, or whatever will come next, this is probably the most common dismissal of fangirls and their interests, and it’s simply not true. Yes, stars often being overwhelmingly good-looking is a huge bonus (who doesn’t want to look at Taehyung’s face?) but a fangirl’s love runs much deeper. It’s about analysing lyrics or scenes, the emotional catharsis of live events, and the community we have the privilege of creating and sharing with each other. Besides, I think we can all admit there are some, uh, not-so-good-looking celebrities with very dedicated fandoms…

It’s also a confusing instance of heteronormativity and gender binary, that seems to imply that all fans are straight and female and all icons are male. Not only does it dismiss straight female fans of female artists, it also dismisses that a large proportion of people in fan spaces are LGBTQ+. In my own fandoms, I’ve encountered many fans who aren’t attracted to their fave at all, and this doesn’t diminish their affection in the slightest. Of course, I have met many fans who are attracted to their faves, and this doesn’t mean their devotion should be disregarded either. Somehow, this misconception manages to completely prohibit female sexuality whilst also claiming that it’s all teenage girls are capable of.

Fangirls are also far more self-aware than the general public gives them credit for. They’re aware that the relationship they have with their fave is parasocial (meaning encounters between an audience and a performer in mass media, enhanced by self-disclosure from the artist and/or their persona) and no, they’re not convinced they’re gonna marry them and live happily ever after. Although, who doesn’t like to daydream?…

Sometimes, heart-breakingly, celebrities take the trivialisation of their fandom personally, which in some ways is understandable – their life’s work is deemed worthless just because their fans are mostly young and female. However, some celebs then come to resent their fandom and reject both their fans and the labels placed on them (e.g. ‘we’re a real band, not a boyband!’). Someone who doesn’t do this though, is Harry Styles, who, having been idealised both as part of One Direction and as a solo star, arguably knows fangirls better than anyone. Speaking to Rolling Stone in 2017, he summed it up perfectly: 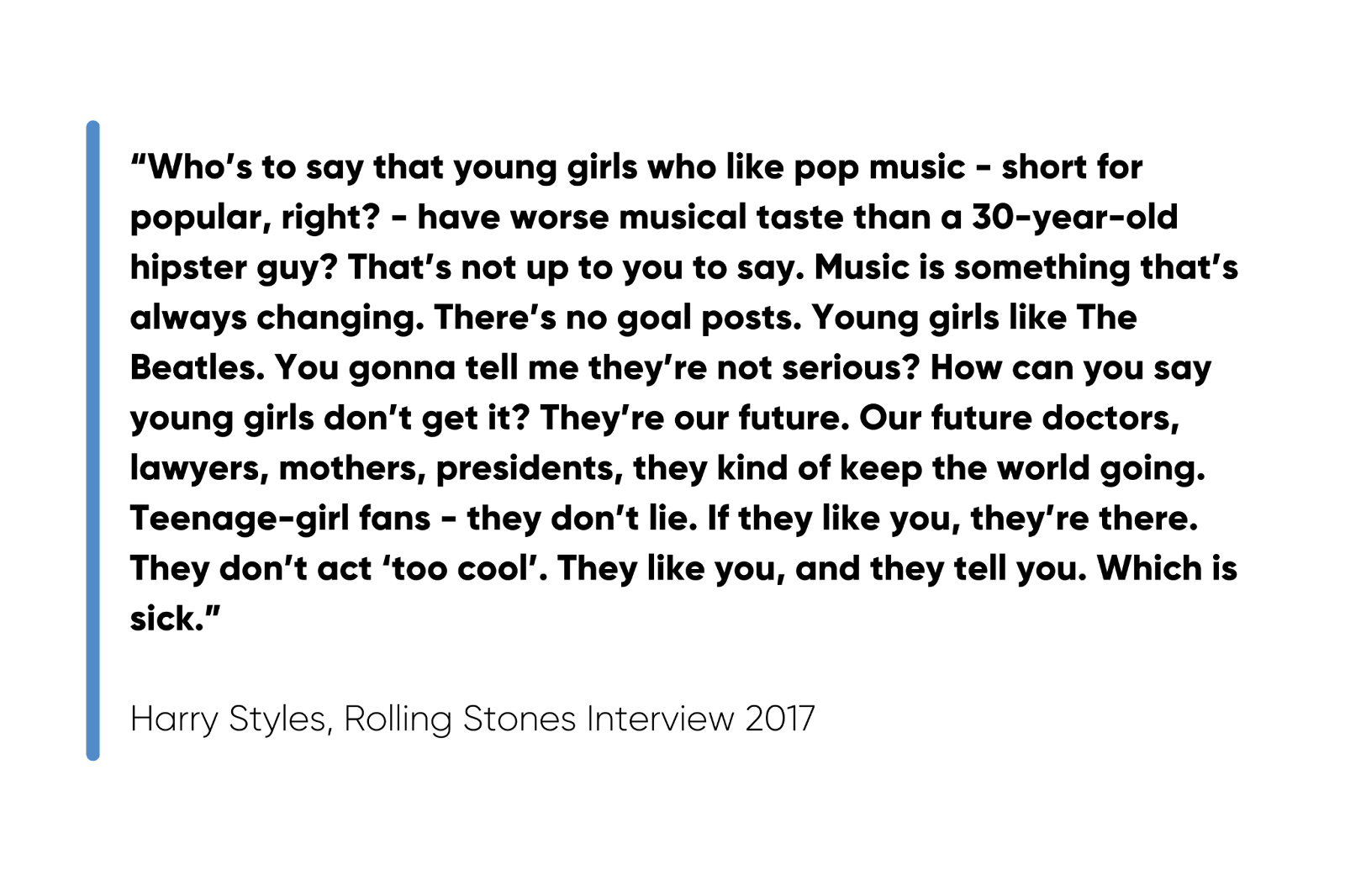 Fangirls continue to be tastemakers, and their impact on popular culture is mocked until it is, almost inevitably, accepted by the general public. It’s not a fangirls fault if you’re too slow to catch on to something great.

Want to write for us?!

tell us about what you'd like to contribute:
Email:
Name:

Your message has been sent and We'll contact you shortly. :)

Let your voice be heard: